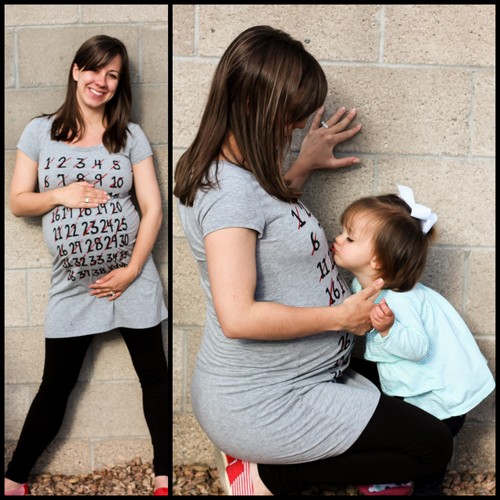 We have had a crazy couple of weeks with miss Chloe Jane (yes we finally decided on a middle name!!). At our appointment last week (37 weeks) we saw a different doctor and when she was listening to her heartbeat it was lower than it should have been (112 and then went back up to 120 and 130… ) so she wanted us to go get a BPP (bio physical profile ultrasound test) just to make sure that everything was ok. During the test Chloe did great and her heart rate was back up in the 130s and 140s. Then they put me on the monitor for 30 min for an NST (non-stress test) to have a longer reading of her heart rate. During this time it looked great- she had lots of variability (Aubrey tells me this is a good thing and what they look for- when the heartbeat has accelerations), but at one point she had a slight deceleration (which could have been her sitting on the cord or something else), but turned out to be nothing to be concerned about. However, the on call doctor was relayed incorrect information about the readings and wanted us to come down to the hospital for a longer reading/testing, but luckily there was a mid-wife that came back after lunch that read the strip and heard the report and said that everything looked great and that it wasn’t necessary to go down for more testing that day (Aubs read the strip too and said the same thing- so thankful for her!). They compromised at me going in for twice weekly BPP’s and a growth scan up until she is born. It was such a long day with lots of emotions, but at the end of the day we were super thankful that everything checked out fine and has been great ever since. Even though it seemed like unnecessary worry and tests, I am glad that we got to check in on her and know for sure that she is doing good! Praise the Lord!

On Thursday (yesterday) we had our second BPP for the week and as the ultrasound tech was looking for Chloe’s head she instead said, “Ummm, thats the baby’s bladder…” and I responded with, “What?!” because the position of her bladder was in the same spot that her head was in on Monday… she continued to move the wand up toward my ribs and said, “yup, there’s her head. This baby is breech!” I could not believe what I was hearing! I was in TOTAL shock. That little stinker had somehow turned herself around between Monday and Thursday and is now no where near the correct position for birth!! Everything else looked great though.

So we went down to see my doctor afterward and discussed our options. We talked about doing a version to externally try to get her to flip around, going to a chiropractor or getting acupuncture. We decided that we didn’t want to force anything that could cause risk to Chloe (even if the risk is low), so we decided to go for praying (and maybe doing some fun gymnastic type moves at home) to get Chloe to flip on her own and if she doesn’t then we have a c-section scheduled for 9:30 am on Thursday, April 10th! If she happens to be head down that morning then we will induce and try to have her vaginally but if she is still breech we will get to have our sweet baby girl in our arms before lunch on Thursday!!!

I have lots of mixed emotions about all of this. Mostly still in shock– didn’t think she could actually flip this late in the game esp when there is NO room left! Of course a c-section was not at all what I had in mind for this birth and so I am having to come to terms with it and all that it entails. It is a blessing that we are living with my mom and to have her help. I was really looking forward to laboring with my sister and getting to experience it again with Chase, but I know that it will be just as special and just as sweet when we get to hear her cry and hold her for the first time. I am thankful for a healthy baby and excited/nervous for next week! Chase keeps telling me that I love a plan and now I have one, so that’s a positive too! 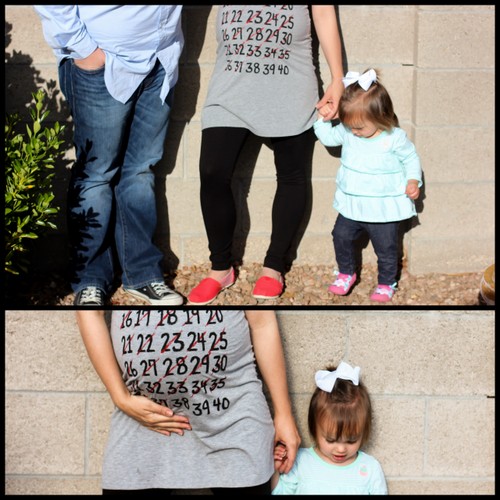 Maternity clothes? yup, and sick of them at this point

Stretch marks? I found a couple :/

Sleep: been sleeping pretty good except for potty breaks

Best moment this week: when Lydia kissed Chloe and gave her milk from her baby doll’s bottle… cannot wait to see her reaction to her baby sister! (hoping and praying she adjusts well…)

Miss Anything? laying on my stomach and back- regular clothes

Movement: apparently lots since she did a summersault to face the wrong way!

Just saw this comment from last time… guess I spoke too soon!! We went to the doctor today and she is head down, back up and in perfect position for birth! Hoping she stays this way and just continues to move downward 🙂

Anything making you queasy or sick: not really

Gender: girl!!- this has been confirmed several times in the ultrasounds

Labor Signs: I was 1 cm and long yesterday… which now I hope I just stay the same since I can’t go into labor and have her breech anyway… still having Braxton Hicks daily thou.

Belly Button in or out? out

Wedding rings on or off? on

Happy or Moody most of the time: happy and nervous about the c-section

Looking forward to: kissing and holding Chloe on Thursday!!

This entry was posted in Chloe, Everyday Life, Family, mcpeanut. Bookmark the permalink.